Big-picture thinking is part of the business mantra for the team at MSWA.

One of the largest not-for-profit organisations in the State, MSWA has etched its name into the local vernacular with high-profile fundraising efforts such as the MSWA Mega Home Lottery, MSWA Ocean Ride and MS Readathon.

Dedicated to helping people living with neurological conditions, over the last decade it has invested more than $20 million in research funding — making it the leading contributor to neurological research in WA.

In the 2021-22 financial year it made a record $10m contribution, which is being used by recipients to advance studies to clinical trials for new treatments and medications, develop and trial new apps and educational tools, and provide novel insights that add to the knowledge of the wider neurological research community.

“I actually see MSWA as a leader within our community now, and as an influencer of government, business, and the general cross-section of folk, to actually make Western Australia better and, if anything, a more ethical place,” says MSWA CEO Marcus Stafford.

As well as its headline fundraising endeavours, MSWA provides healthcare services and accommodation, such as the development of a $7m facility in Albany for people living with neurological conditions.

“The irony of that is that I'd actually be really happy to forego the number one status badge if the rest of the country could step up for funding of research,” says Stafford.

“MSWA boxes well above its weight in that regard. We believe strongly in research —  both for a cure for neurological conditions, but also to help people with their current quality of life and the things that they might seek.”

Stafford acknowledges the MSWA Mega Home Lottery has become a well-recognised brand in itself. The last lottery comprised a first prize $2.7m home and $1m cash, second-prize $1.3m townhouse and third-prize $1.5m apartment. All up, MSWA wrote more than $25 million of business in just 11 days.

“I shop in supermarkets like the rest of us and have complete strangers coming up to me and sort of tugging me on the sleeve and saying, ‘I'm going to win the house next time’,” Stafford says.

He says the genesis of the Mega Home Lottery was a phone call from the CEO of a similar organisation in South Australia alerting him to a Canadian lottery that was about to set up in Adelaide — in direct threat to his friend’s business. 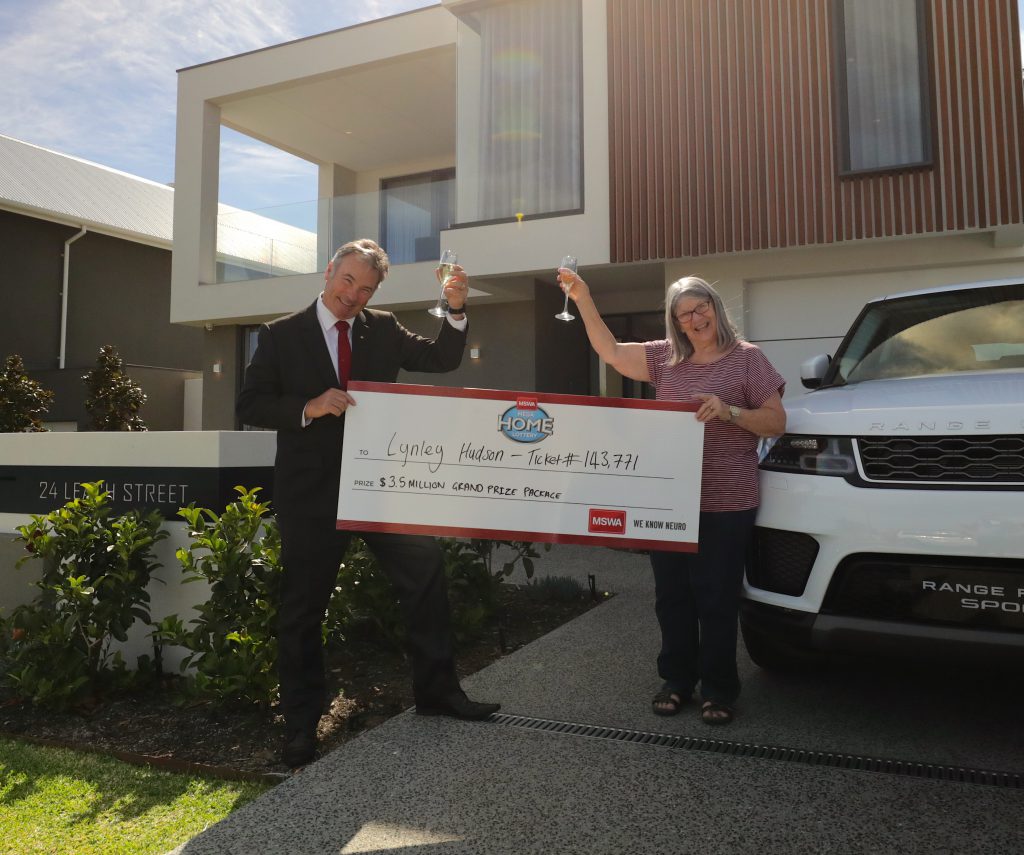 Stafford with a MSWA Mega Home Lottery winner in March 2021.

After a sleepless night, Stafford went into the office and decided to get on the front foot.

“I thought I’ve got one of two options here: I can either sit here and wait for this ship to arrive in Fremantle and do what it does to Western Australia, or maybe we can take a different approach and become the leader of a product of this nature within Western Australia,” he says.

Stafford says the key to MSWA’s success is its unwavering focus on its three core areas – healthcare, accommodation and funding research — and not being distracted by “flavours of the month and too many fads”.

The organisation’s partnership with CCIWA is based on providing a balance between private sector enterprise and working for better community outcomes, he says.

“CCI is about facilitating trade and business within our State and MSWA is about ensuring that those who through no fault of their own have become members of a club they never wanted to join, also get a voice within WA,” he says.

Note: Marcus Stafford steps down as CEO of MSWA in October. Melanie Kiely has been appointed as his replacement and will take up her role in early 2022.

Stafford is a Board Member of CCIWA.

Big-picture thinking is part of the business mantra for the team at MSWA, which has made a name for itself with its mega-fundraising efforts.