This year marks 20 years of supplying controlled environment safe havens for Welshpool-based MineARC, with business going so well the company will more than triple its workshop to 2000 sq m and move to Kewdale within six months.

MineARC designs and manufactures the life-saving chambers, which remove carbon dioxide and other toxins and add oxygen, while keeping those inside safe from dangers including rockfalls, fires, chemical and natural disasters. 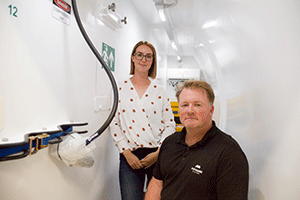 It has supplied more than 2500 units to 300 sites across 62 countries and derives 70 per cent of revenue from offshore.

The company has received numerous industry awards for its products and services and took out last year’s Telstra business of the year award.

The high-tech rooms which meet world’s best practice guidelines, come in varying sizes and can be mobile or permanent.

Apart from the chamber shell, they are designed and manufactured inhouse with skillsets ranging from 11 engineers (mechanical, software and electrical) through to electricians and trades assistants.

Sales and marketing director Dion Smith says the company is well ahead of its forecast 28 per cent growth in revenue for this financial year with improved economic conditions, the shift by mines from open pit to underground and capital works fuelling the growth.

He says publicity around winning last year’s award lifted the company’s profile just as it was about to launch five new products, including a cap lamp featuring near natural light, auto dimming and tracking and reaching its 20-year milestone.

The media coverage also brought some touching accounts from people who had used the safe havens in death defying scenarios, such as a man who was confronted by a truck fire in an underground copper mine in NSW.

“The chambers get utilised sometimes in a pretty scary situations, so we had some quite emotive responses,” Smith says.

“It was good to put real faces and real names to some of those hazards.”

The product range has since diversified to include chambers for tunnelling projects, at petrochemical sites, disaster relief and a newly released biotechnology grow chamber for agriculture and science. It also supplies other safety equipment such as cap lamps and air quality management systems.

The Perth headquarters with 64 staff is the largest of its three manufacturing facilities, with the other two based in Dallas, Texas and Johannesburg, South Africa plus there is an assortment of other offices overseas. Find out more here.

Nominations for this year’s Telstra Business Awards are closing soon. Anyone can nominate a business. Find out more here.

► MineARC and Telstra are CCIWA Members. Find out about the benefits of business membership here.