Skills shortages, freight costs and diversification of the economy were raised as key issues by manufacturing and resource industry leaders during a roundtable with Federal Deputy Labor Leader Richard Marles this morning.

The private event, facilitated by CCIWA, provided an opportunity for members to hear from the Shadow Minister for National Reconstruction, Employment, Skills, Science and Small Business ahead of the federal election.

Attendees outlined what a possible Federal Labor government would need to deliver for their business, as well as the biggest challenges they currently face. 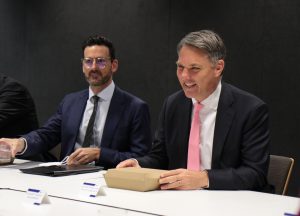 Marles was also asked his views on local procurement strategies, as well as bolstering downstream manufacturing across several emerging industries.

Relations with China were also an issue for several businesses that relied on materials from Australia’s biggest trading partner.

On skills shortages, a business owner in agricultural manufacturing said there needed to be a mechanism in place for retirees who wanted to re-enter the workforce part-time to do so without being “overtaxed” on their pension — a policy CCIWA has also recommended.

“There’s a whole workforce out there that is ready to come back but for some unknown reason we are overtaxing these people,” they said.

Another attendee highlighted how “this is a new era of intermediate and downstream processing”, but infrastructure support was “absolutely mission critical”.

“The downstream processing piece, which then follows into advanced manufacturing and solving supply chains is something we haven’t really done for a number of decades.”

Marles said the skills crisis had been illuminated by the two-year international border closure. While it was important to ensure skilled migrants as well as students and backpackers came back, the lesson was to invest in training the next generation of local workers in the areas that needed them.

Marles said the ‘modernity’ gap between manufacturing-driven countries such as South Korea and Germany and Australia was widening. He said he believed Australia could be a leader in science and technology, noting it already led the world in agricultural and mining technology.

“It’s about infusing science and tech within our economy and climbing the technological ladder,” he said.

The CEO of one international manufacturer said it was important “to have a really diversified perspective on manufacturing in Western Australia”.

Perth Federal Labor MP Patrick Gorman said the biggest misconception about WA from Eastern States-based politicians was the size and scale of the WA economy.

“It’s not just an iron ore/oil and gas economy, there’s so much more already happening and so much opportunity,” he said.

He said as well as a broader vision it was important to “never look past regulation, tax and procurement issues because often they are the impediments that sit there, they are the signals that can be settled so that we can unlock the value across the businesses”.

CCIWA’s International Trade and Investment Centre (ITIC) can help businesses reduce the time, cost and risk of going global. Contact the team for a free consultation on (08) 9365 7620 or via trade@cciwa.com.