The uprising of the apprenticeship

Home » Business Pulse » The uprising of the apprenticeship

For so long now, we have for some unknown reason put apprenticeships in the shadow of other educational pathways such as university. 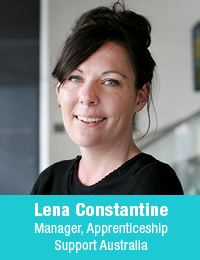 When I was growing up, if you were ‘good at school’ you were assumed to go to university. If you weren’t as scholastically inclined, you left school and got a job or an apprenticeship.

On reflection, it was often spoken of as the poor cousin to university – which is a shame because while I love managing teams at CCIWA, I think I would have made a good carpenter or mechanic.

Well, the time has come to put apprenticeships on equal footing on the career pathway stage.

It’s time we gave both pathways equal spotlight, to make sure we all have a chance to move through a career in which we achieve contentment.

Here’s three reasons why: They offer strong well-being outcomes, they lead to jobs and the offer lower debt outcomes.

In fact, Apprenticeship Support Australia (ASA) has just released its Skillsroad 2018 Youth Census report, Australia’s largest collection of data on 15-24-year-olds. It showed that youth who pursued an apprenticeship pathway reported the highest level of wellbeing compared with any other pathway, including taking a gap year.

The average wellbeing score for youth living in Australia was 113, with the highest possible score being 150 and the lowest being 30. The cohort that had undertaken an apprenticeship indicated a wellbeing score of 121.

Research by McCrindle commissioned by the Skilling Australia Foundation has also showed that eight in 10 VET graduates have a job soon after training, versus seven in 10 university graduates; and nine in 10 trade apprentices secure jobs straights after finishing their training.

Apprenticeships also ensure skills learnt through training are utilised. According to the ASA Youth Census, job outcomes for those aged 20-24 showed “those who attended university were 44 per cent more likely to be in a job unrelated to their post school education or training, while those who pursued a trade were 16 per cent less likely when compared to the survey sample”.

The best outcomes one can achieve from investing in years of education or training is being able to put those skills to use and to get a return on investment through employment and wages. It’s worth exploring all your study options, to determine what’s going to be most likely to get you a job that sets you off on an enjoyable career pathway.

From there, anything can happen. You may do further study, move across industries, get a promotion or two or even start your own business.

Debts incurred for university degrees can go over $100,000, with the average time taken to pay off student loans close to nine years. With apprenticeships, the most one can borrow is up to $20,000 through Trade Support Loans to assist with living costs through training.  And because you are earning wages while you learn, and your employer usually pays for your training, you come out with very little debt.

It’s really important that we stop putting apprenticeships in the shadow and bring out them out on stage. While they may not be for everyone, it’s surely worth exploring all options before making decisions on your future.

As far as I’m concerned, acquiring a debt to learn skills and become employable is a debt worth incurring. Investing in a pathway for yourself to get a decent return is what we should all be aiming for – so be sure to consider apprenticeships when making your choice.

Lena Constantine is the Manager of Apprenticeship Support Australia, which is run by CCIWA.