The Maritime Union of Australia’s protracted industrial action at Fremantle Port is menacing the WA economy by delaying critical supplies for the agricultural, construction and mining sectors and ahead of vital Christmas trade, says CCIWA.

Editor’s note: The MUA announced it was suspending strike action from 3:00pm today (October 15). It has sought a conciliation hearing at the Fair Work Commission (FWC) this afternoon.

Attorney-General Minister Michaelia Cash was poised to apply to the FWC to terminate the ongoing strikes, and CCIWA will be supporting any such action. 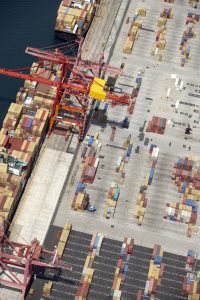 “The strikes are preventing vital supply ships to and from WA being unloaded, threatening Western Australian jobs and the effort to diversify our economy and attract more investment,” said CCIWA CEO Chris Rodwell.

“Critical mining and agricultural machines have been bobbing around in the sea off Adelaide and Melbourne, instead of being on the ground and working for Western Australians.”

After a bruising 18 months, WA’s farmers and agriculture businesses are looking to a bumper harvest to help them regain their feet, Rodwell said.

“Resources businesses are grappling with softening commodity prices. Container ports are vital for exporting downstream battery chemicals, and thus are a vital piece of infrastructure for economic diversification.

“WA’s shops and retailers are looking to stock their shelves and warehouses as they look ahead to the Christmas rush.

“All are put at risk by the delays, higher costs and uncertainty imposed by a stalemate about work rosters, and negotiations that have ground on since 2019.”

He added: “These events strengthen the case for industrial relations reform to protect the West Australian community and economy from being held to ransom.”

For IR advice contact CCIWA’s Workplace Relations team on 1300 422 492 or via BusinessLawWA@cciwa.com.

For general business advice contact our Employee Relations Advice Centre on (08) 9365 7660 or via advice@cciwa.com.