Just how do you find trainee technicians to help with the maintenance of ejection seats in the Royal Australian Air Force’s fleet of training aircraft? 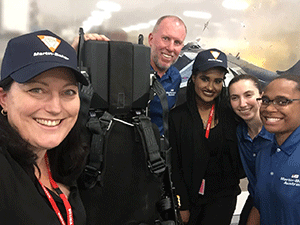 That was the quandary facing Martin-Baker Australia as it looked to grow its team after establishing the RAAF Base Pearce workshop of the global ejection seat manufacturer last year.

Martin-Baker Australia lead maintainer Shayne Hamilton turned to CCIWA’s Apprenticeship Support Australia (ASA) for help where the experts knew just what to do, even though they too had not recruited for such positions before.

The workshop is dedicated to maintenance, repair and overhaul (MRO) work of the ejection seats and safety equipment that are fitted to the RAAF’s new fleet of Pilatus PC-21 trainer aircraft. The PC-21s are replacing the ageing PC-9/A trainer aircraft, as part of the RAAF’s AIR 5428 pilot training program.

Martin-Baker, which expanded to Australia in 2015, also set up a second workshop last year to undertake MRO work on the lethal new F-35A Joint Strike Fighter fleet, which will be based at the Williamtown RAAF Base in NSW and will see 72 aircraft in operation by 2023.

Hamilton, a Mechanical AME and ex-RAAF armourer, said the Pearce office is responsible for ejection seat and canopy maintenance exclusively of the  PC-21s, though will be able to carry out works on other aircraft if required.

When he and Queensland-based Managing Director Andrew Eden set up the workshop, they wanted to follow the lead of the parent United Kingdom-based company, which has an extensive apprenticeship program.

“It was important for us to grow our ranks with local personnel and support the local economy that supports us. It was a good opportunity to grow the business in the form of trainees,” he said.

With such niche positions on offer, Hamilton enlisted the help of ASA’s careers and mentoring team leader Sandra McKechnie for advice on how to structure the traineeship and recruitment.

“Bringing apprentices or trainees on board was a little bit new to Andrew and I, so it was obvious early on that we needed some expert guidance on how to make this happen,” Hamilton said.

“Sandra wrote a fantastic advertisement that we, in our wildest dreams, would not have been able to write. That was the key ingredient for us.”

ASA whittled the 45 applicants down to 12, which Hamilton further shortlisted before hiring trainee ejection seat technicians Melissa Kirkness and Angelina Mene, who started in February.

“That’s not where ASA’s role ended because they have pledged support as well, which is fantastic. They’ve given Melissa and Angelina a point of contact outside of the business where they can go if they have questions relating to traineeships in general and how to receive that support,” he said.

“We welcome that because we are a small organisation and we don’t have lavish internal HR departments and training departments to help, so being able to tap into that sort of service is fantastic.”

Hamilton, Mene and Kirkness will play a key role in keeping pilots – who will be flying the world’s most advanced pilot training aircraft – safe in the event of an emergency. The seats require servicing every two years and major overhaul when they reach 10 years.

Mene, a year 12 graduate with her sights set on becoming a pilot, and Kirkness, a university graduate striving to become a technical expert, both had a keen interest in aviation and say the three-year traineeship will set them up for a career in the sector.

Just weeks into their new jobs, both trainees already have a sense of the critical nature of their roles, having rubbed shoulders with the pilots using the aircraft.

“It’s exceptionally important. The pilots who come through here are potentially sitting on our chairs so it’s extremely important and it is confronting, they are right there so you get to see who you are looking after,” Kirkness said.

Hands on training will be complemented with studies towards health and safety and a diploma in aviation.

“It was definitely the best opportunity out there in terms of aviation and in Perth and being hands on is the best way to learn,” Kirkness said.

“It’s great being a book nerd but at the end of the day you can’t necessarily put it into practice, it’s a whole different other playing field.”

McKechnie said even though the roles were “absolutely unique” it was possible to find a training solution for Martin-Baker Australia. It’s also become her “go to story at barbecues”, although she has previously helped find a trainee funeral assistant.

► Apprenticeship Support Australia is a free service to help you recruit, train and retain apprentices and trainees and is based in 14 locations throughout WA. Find out more here.