Prime Minister Scott Morrison has used a speech to CCIWA members to praise the role of the WA business community in navigating the pandemic while highlighting workforce skills and training as the “single biggest challenge facing the Australian economy”.

He said in what has been the most difficult year for Australia in 75 years, “our shared efforts to get us to where we are today is a great national achievement and one in which Western Australia has played such a significant role”.

“In this, my first opportunity to come back, particularly because of COVID, I simply just want to say thank you Western Australia,” he said.

“Your sacrifices, the work over the past year, have been inspirational.”

The Prime Minister, in his first major event in WA since late 2019, described the JobKeeper wage scheme as a partnership with employers that kept millions of Australians in work, but that ending it was also as important to avoid “a subsidised economy into the future”.

“Training people with the right skills that you need in your businesses to be competitive,” he said.

He also emphasised his support for the mining and resources sector as a key part of Australia’s future and noted WA’s importance in the Government’s recently released resources technology and critical minerals roadmap. 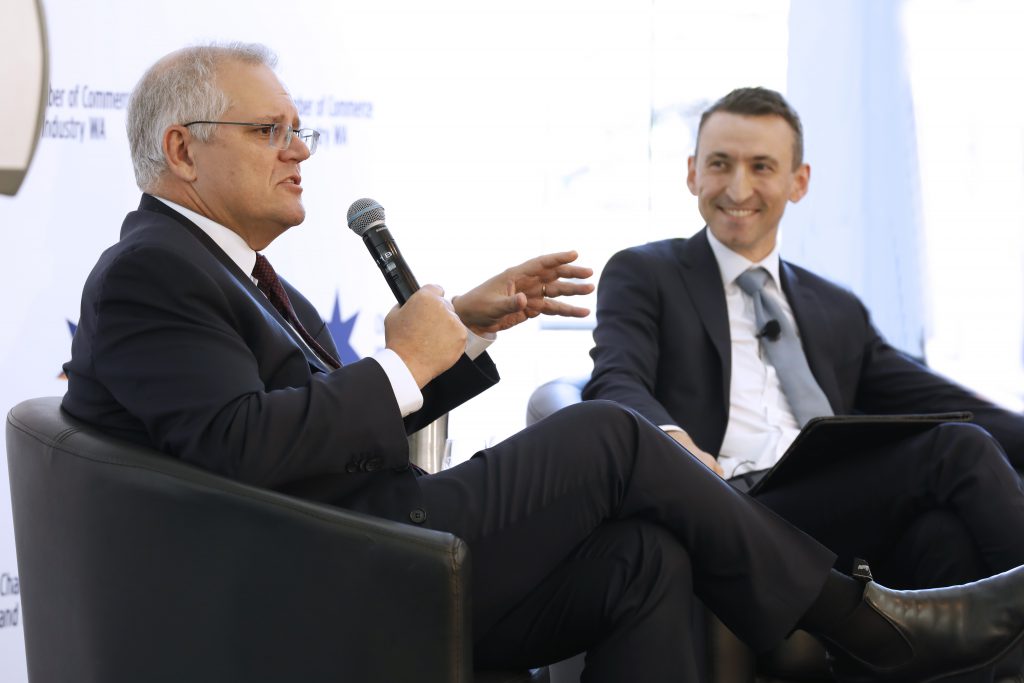 GST deal ‘in our marrow’

The Prime Minister said the 2018 GST deal, which the CCIWA advocated for, is secured, adding “it is in our marrow, it is in our bones”.

“Western Australians, I know, can have assurance about this deal because you’re looking at the person who put it together,” he said.

In a Q&A with CCIWA Chief Economist Aaron Morey following his speech, the Prime Minister said the immediate priority is vaccinating the elderly and vulnerable.

However, he said he has tasked the national medical expert panel with recommending a path forward towards opening borders and allowing more travel.

“What we are working on at the moment is to enable Australians who are vaccinated to be able to travel overseas and return – those who need to – and to also for returning Australian residents from low-risk countries to do that as well and not go through hotel quarantine but a modified form of home isolation quarantine,” he said.

Prior to the lunch, the Prime Minister officially opened CCIWA’s new offices in the CBD where he congratulated the chamber on its work as a strong advocate on behalf of business.

“You work with people who can get things done and I think that is an example to so many other organisations around the country,” he said.

CCIWA CEO Chris Rodwell commended the Prime Minister on leading Australia’s successful defence against COVID-19 and said CCIWA’s focus is to lay the foundation for a more diverse, secure and innovative economy.

CCIWA Board President Nicolle Jenkins said the Prime Minister’s visit marked “the next era of Western Australia’s entrepreneurial spirit, with CCIWA remaining at the forefront of reform”.