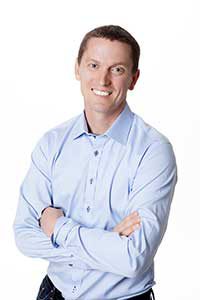 Robotics engineer Ed Serrano took a punt on his business — making saws that cut timber for building houses — because he believed in an orphan product.

The company – Vekta Advanced Automation – has since set up a manufacturing base in the United States and also exports to Canada and New Zealand.

“I was an engineer for another company prior to Vekta, and I got to know the products and the industry,” he said.

“When the recession hit, the company decided to discontinue one line of product. It had been one of the bread-and-butter products I’d worked on. At the time it wasn’t selling well … but I felt it just needed TLC.”

Serrano, his wife Shelena and brother Jeff, a mechanical engineer, negotiated to buy the rights to the product and pay it off over two years.

“We were able to start the business, let it grow and pay the amount off over time,” Ed said.

“We also felt that the only way to move the company forward was to develop a new product. We built a material handling machine that we sold into the US. We sold quite a lot and that enabled us to fund more development. We now have a larger product base to fund the business.”

Delivering a successful new product every couple of years allowed Vekta to fund more development and stay ahead of the competition.

To develop a printer that marks lengths of timber with details helpful to a build, Serrano approached Hewlett-Packard and negotiated approval to incorporate the computer giant’s technology.

Jeff set up the manufacturing base in the US, where the company’s market is five times bigger than at home.

Ed has learned some important lessons along the way. “People told me setting up a business would be stressful, but you don’t appreciate how stressful until you’re there — particularly on cash flow,” he said.

“If I did this again I would understand finance and cash flow more — and plan for contingencies. “You do have to be willing to take the risk, but it’s a marathon not a sprint. Take one step at a time. As long as you’re making progress, that’s good.”

Ed’s efforts were recognised when he took out the 2018 40under40 Medium Business category.

Robotics engineer Ed Serrano took a punt on his business — making saws that cut timber for building houses — because he believed in an orphan product.
Become a Member and get unlimited access to Business Toolbox today
Our range of Membership Packages has been created to connect you to the resources and people you need to be successful. All Membership Packages include unlimited Business Toolbox access.
Join today Already a member? Login
Login

Whether you’re already an e-merchant or looking to become one, make sure you’ve set up some website basics right from the start.

Amid growing global interest in green hydrogen, Perth-based Province Resources is powering ahead with its $22 billion project in WA’s Gascoyne region.

Fittingly for the CEO of a footwear manufacturer, it was a boots-on-the-ground approach that led Garry Johnson to begin the journey of taking Steel Blue...