The Federal Government’s Secure Jobs Better Pay Bill has been passed by Parliament following deals with the Greens and Independent Senator David Pocock in the Senate.

Editor’s note: This article was updated on Friday, December 2 after the Bill passed Parliament.

CCIWA CEO Chris Rodwell said it was a deeply disappointing outcome that will negatively impact jobs and businesses. 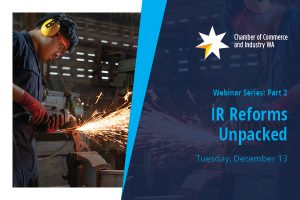 “While some of the amendments accepted by the Government reflect business concern, they don’t go far enough,” he said.

CLICK HERE FOR RESOURCES & ADVICE ON THE IR BILL

Some of the changes to the previous iteration of the Bill include:

The Bill still includes multi-employer bargaining provisions, which means small businesses with more than 20 employees can be forced to adopt workplace arrangements and pay rates that they had no role in negotiating.

Competitors can still be forced to bargain together, and employers and employees who both want to negotiate their own enterprise agreement will still have no avenue to exit an ill-suited, one-sized-fits-all multi-employer regulation.

CCIWA was in Canberra this week to make strong representations on the impacts of the Bill, including meeting with key ministers on how the changes will work in practice, and to understand how it will apply to businesses.

Workplace Relations Minister Tony Burke told media on Sunday that for small businesses with up to 50 staff, the legal onus will be on unions to convince the Fair Work Commission that multiple employers have a “reasonably comparable” business under the common interest test.

The reverse onus would apply to larger businesses, where employers would have to prove they were not reasonably comparable.

For practical advice and resources see cciwa.com/advocating-for-change/ir-reform-bill/, or contact our Employee Relations Advice Centre (08) 9365 7660, or via advice@cciwa.com.