“Never give up” and “you can do it”. These are two of the powerful messages from CCIWA’s two most senior office bearers on International Women’s Day.

Speaking to CCIWA staff at a #BreaktheBias breakfast this morning, CCIWA President Nicolle Jenkins and Vice-President Nicki Ivory detailed their own journeys juggling careers and families, and encouraged other women to continue to push boundaries.

Jenkins, who is managing director of The Hub Marketing Communications, said balancing a career and family was one of the key reasons she started her own business 17 years ago.

“I’ve worked in a lot of male-dominated industries, but I’ve chosen a way to navigate that, that I think best suits me in trying to achieve the outcomes that I was trying to achieve,” she said. 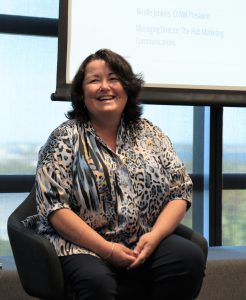 She said her mentality to “never give up” drove her to overcome difficult situations.

She admitted, though, that she kept both her pregnancies from some clients because she believed it was “easier” not to tell them in case they questioned her ongoing commitment to the business.

“I worked, and in fact I was at work when I went into labour both times,” she said.

Her advice for other women is that it is possible to “have it all” but “in the context of your life and what you want”.

“It just takes compromise because that’s life,” she said. “We all make choices and we all make decisions.”
Jenkins lives by the mantra “Never be becalmed; always make decisions”. “There will be disappointment, but how you bounce back is a measure of your grit, your determination and who you are as a human being,” she said.

Ivory, a partner and Perth Financial Advisory Leader at Deloitte Touche Tohmatsu, made history last month when she was elected vice president of CCIWA — the first time in CCIWA’s 130-year history that the president and vice president are both women. 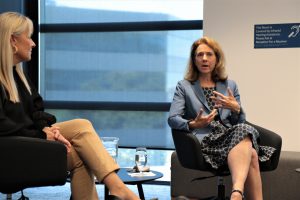 She said starting out in investment banking was a tightrope of how to look and act, and “completely incompatible with having a family”.

She also described experiencing societal bias — including from women — when she returned to work after six months of maternity leave, and the judgement her husband received when he attended her mother’s group in her place.

However, she credited her strong mother, who raised her as a single working parent in South Africa, for teaching her that “you have to be able to stand on your own two feet”.

Now, as a leader in her industry, Ivory said it was important to be a role model for other women, which included respecting that no two circumstances are the same.

“Being a role model and advocate and calling out (bias) has been relatively easy for me to do,” she said.

“We have to say to women that you can do it. Persistence and perseverance is how women get ahead, but it’s doing it with confidence.”

International Women’s Day on March 8 is a global day celebrating the social, economic, cultural, and political achievements of women. The day also marks a call to action for accelerating women’s equality, #BreaktheBias.

A long and challenging path to equality

CCIWA People and Culture Director Tracy Al Saidi said it was important to recognise that the path to women’s equality has been long and challenging.

“The journey has been a long one; the conversation started in the early 1900s where the activism started,” she said. 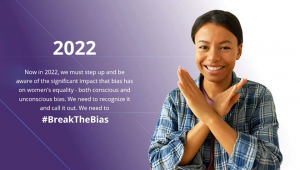 “Women’s participation in government, the gender pay gap, the bias that exists — these are all elements that we’re still having conversations about.”

Al Saidi said while there has been progress over many years it was important to think about ongoing bias that exists today.

“Whether it’s conscious or whether it’s unconscious, that we recognise it, that we call it out and we really identify actions for change.”