A steep drop in the number of new apprentices and trainees has underlined concerns over impending skills shortages.

The National Centre for Vocational Education Research revealed an 11 per cent drop in apprenticeship and traineeship commencements in the 2020 March quarter compared with the same period last year.

The upcoming tightening of the Federal Government’s JobKeeper scheme has triggered concern among thousands of businesses who will no longer be eligible for the scheme, which props up many trainees and apprentices.

About half of WA businesses expect to stop receiving the subsidy after the rule changes take effect in late September.

But about 9000 WA businesses will still qualify for the Federal Government’s Supporting Apprenticeship and Trainees (SAT) subsidy – many unaware they remain eligible.

This has prompted a warning by the Chamber of Commerce and Industry WA (CCIWA) and Apprenticeship Support Australia to ensure eligible Western Australian businesses are ready to switch to SAT when they transition off JobKeeper.

Data from Apprenticeship Support Australia and CCIWA indicates that fewer than 50 per cent of eligible businesses in Western Australia are currently in receipt of the SAT subsidy, with the majority opting to receive JobKeeper instead.

Apprenticeship Support Australia and CCIWA have called for employers to stand together to secure our State’s skills pipeline, by safeguarding the positions of apprentices and trainees during this transition.

“If businesses don’t know they can still access support to help pay their apprentices, those apprenticeships can be at risk.”

She said the WA economy is “in no position to sustain further loss of apprenticeship numbers,” with “shockingly low” apprenticeship and traineeship commencement numbers released on Tuesday.

The SAT subsidy pays 50 per cent of an apprentice or trainees wage and does not require a business to show a turnover loss.

The scheme has been extended to businesses with up to 200 employees who employ an apprentice or trainee.

Meanwhile, the WA Government is offering up to $6000 to employers to take on a displaced apprentice or trainee during the COVID-19 recovery. 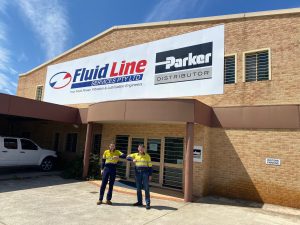 Richard Argus, who owns WA hydraulics systems company Fluid Line Services, says maintaining a solid base of apprentices was key to the success of his business.

“We’ve always committed to apprentices and the pains that that brings you because hopefully it also brings you rewards – it is investment in people,” he says.

He says the drops in people starting apprenticeships in his industry would stifle its growth.