Prime Minister Scott Morrison says Australia’s path out of the pandemic will be earmarked by “business-led growth” as he positioned WA as a future “powerhouse” of the critical minerals industry.

Addressing business leaders at CCIWA’s Business Breakfast this morning, the Prime Minister praised WA businesses for their resilience and leadership over the past two years.

He also thanked CCIWA for working with government to achieve “the right outcomes for the Western Australian economy”. 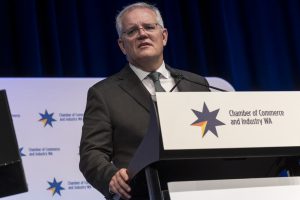 “We’ve out-performed major advanced economies. Our economy is now 3.4 per cent larger than when the pandemic hit,” he said.

The Prime Minister announced a $200 million investment over the next five years to support strategically significant critical minerals projects through the Critical Minerals Accelerator Initiative.

He also committed $50m over three years to establish the Virtual National Critical Minerals Research and Development Centre, which will draw the expertise from the CSIRO, Geoscience Australia and the Australian Nuclear Science and Technology Organisation, ANSTO.

In addition, $243m will be provided for four projects, who of which are in WA, under the resources and critical minerals stream of the Modern Manufacturing Initiative.

“Our goal was to make Australia a critical minerals powerhouse in the new global economy,” he said.

“Critical minerals are key to a stronger economy for Australia and are therefore key to our stronger future. And as we face a more uncertain world, we’re setting up Western Australia to be the powerhouse and reliable partner that our allies and partners need right here in Australia to develop these resources.

He said the State’s 14,500 manufacturing businesses were also well-placed to capitalise on initiatives under the Australian Government’s Modern Manufacturing Strategy.

“Growth is not just in the traditional strengths of food, machinery, metals and engineering,” he said.

During a Q&A with CCIWA Chief Economist Aaron Morey, the Prime Minister was asked about investing in China amid ongoing tensions with Australia’s major trading partner. He said “a conscious strategy of risk diversification is a sound one”, though he believed trade would continue to be strong based on the volume of bilateral trade.

“What it says is, in large part that has continued because it’s in their interest for that to continue,” he said. “Trade always requires both sides of the table to be benefited and where that continues to occur then I imagine that trade will continue.”

On the issue of ongoing support for SMEs, he said the Federal Government had provided “a litany of tax cuts and other incentives”, and noted that many big-ticket government projects such as those in defence had work that went “all the way through that supply chain down to the smallest businesses”.

The Prime Minister said CCIWA was a “national standout when it comes to representative bodies in this country, in the pragmatic, respectful and I think very diligent way that you conduct yourselves”.

“The thing I really love about the chamber here is you just don’t throw rocks from the sideline and just make daily complaints,” he said. 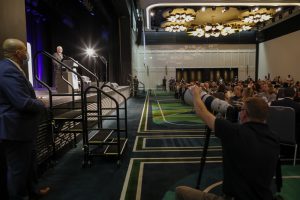 “You actually roll up your sleeves.”

“At the outset of the pandemic few predicted Australia could emerge with rapid job-creation, stronger economic growth than pre-pandemic and absolutely world-leading rates of vaccine protection and lives saved. That’s what Australia has right now,” he said.

“Amid all the current disruption, Australians know that our prosperity has always been business-led, springing from economic reform and thriving trade – particularly here in the heavy-lifting State of WA.”