Cheaper and smaller Australian-made space technologies are opening the door for more use by the defence department, which has its sights set on multi-billion-dollar purchases.

Chief of National Security and Intelligence, Surveillance and Reconnaissance at Defence Science and Technology (DST) Andrew Seedhouse told the Emerging Disruptive Technology Assessment symposium in Perth that in the past Defence had not been a big space user because the costs were too high.

But as demand has driven a need for space technology, more companies had come on board driving down prices and increasing options for future use once approved by the Defence department. 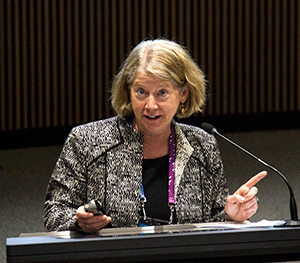 “Now the door is ajar for defence to walk into,” he told the DST event on March 5-6, organised in partnership with UWA, Curtin, ECU and Murdoch to explore the long-term vision of space technologies and held at Woodside’s new head office.

The Australian Government has helped amp up interest in the space industry, last year establishing the Australian Space Agency which has been tasked with tripling sector to a worth of $12 billion by 2030, while the Defence White Paper (2016) recommended almost $12b in space-related technology improvements by 2039.

Seedhouse said lower costs for buying and launching small, short life satellites (100-plus kilograms) would open up options for short missions and the ability to quickly replace satellites with new processing capability when required.

“Those (companies) that are making thousands are going to drive the future of these. We will then see that market opening and everyone being able to launch those sorts of things,” he said.

“If it goes the other way the launch costs become high then we need to sustain those satellites in space but we will have that problem of redundancy. Those are the things we need to watch.”

He said processing the imagery collected in space was essential with machine vision technology helping automate the process.

“Moving out to 2040, let’s say we had full time real video of the entire planet. Can you imagine if we used the techniques we use for security cameras and got a few billion people to stare at that imagery… and actually did it a few times.

“The missions cannot be done by humans, they have to be automated and it’s a big push in Defence and the S&T program to find methods to do that.”

He said communication technology for satellites flying in formations, or constellations, and the accuracy of those formations would be one of the key drivers the Defence department was considering.

“In terms of the satellite space capabilities we have started out on a journey of learning how to operate new satellites. We do have some cubesats, we’re progressing next into looking at how to get the most out of small packages, not necessary the cubesats, but the larger ones with advanced sensor capabilities, and also encrypted and local intercept communication systems. They’re the next steps,” he said.

“The big cash items are learning how to operate constellations and that’s a big investment.”

Nova Systems director of space technology Pam Melroy, a former NASA Space Shuttle pilot and one of only two women to command the space shuttle on a mission, said she would like to see the Australian Government become the customer for all the data coming out of space.

“And I’d want those companies to sell the specialised, advanced services to the commercial companies that need them,” she said.

“There is a great business model around that, but the Government does need to get its act together.”

She said industry was trying to organise around “multiple business models, which means they are going to start arguing with each other about the right way to go forward”.

“That will only confuse the Government about what the right thing to do is.”