The critical freight rail line that connects the Eastern States to WA has been repaired following severe flood damage, but supply backlogs are expected to continue for several weeks.

Australian Rail Track Corporation, which operates the east-west line, said on Tuesday that operations had resumed on the Trans-Australian railway between Adelaide and Tarcoola after 24 days.

“Since the flooding occurred on the weekend of the 21st, 22nd and 23rd of January, our crews have worked around the clock to fix damaged locations along a 300km stretch of track,” said an RETC spokesperson.

The disruption affected already strained supply chains in WA, with a survey of manufacturers by CCIWA showing 94.87 per cent of respondents were reliant on goods imports from the east coast, with 87.18 per cent citing rail as the mode of transport they relied on. 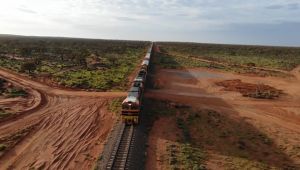 More than half of all respondents (53.85 per cent) were reliant on exporting to the east coast along the east-west freight line, and 53.85 per cent cited rail as the method of transport.

The survey, carried out in the days following the once-in-a-200-year flooding event, more than two-thirds of businesses (67.57 per cent) said the situation needed to be resolved within a few days to avoid the worst of the impacts.

Critically, 84.62 per cent said there were no feasible alternatives, or limited alternatives.

“It’s important that industries such as manufacturing and agriculture that rely on those supply chains to get products to market or to get machinery and parts, remain as competitive as possible if we want to grow and diversify our economy,” he said.

Woolworths opted to ship goods to WA, with 3500 pallets expected to arrive at Fremantle Port by February 22.

Many businesses, however, have indicated it could take up to six weeks to restock supplies.