Government spending has lifted WA’s domestic economy back to pre-pandemic levels, exceeding the level it reached in March 2020.

State Final Demand grew 1.2 per cent compared to a year ago, putting WA in the middle of the pack compared to the other states. 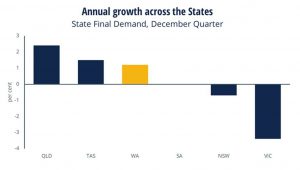 Most of the growth in the WA economy reflects higher government spending, which grew 4.4 per cent in the December quarter (contributing 0.9 percentage points to overall growth). State and Federal stimulus measures also drove dwelling investment higher by 8.9 per cent. 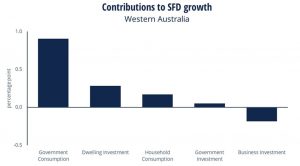 Disappointingly, there was also a further consecutive quarter of decline in business investment, down 1 per cent as machinery and equipment investment in the mining and construction sectors fell.

This result lays bare the dangerous extent to which the WA economy relies on the mining sector, which now comprises 43 per cent of the economy.

For a stronger recovery and more diverse economy, CCIWA’s priority recommendations are for an incoming government to ease the burden of payroll tax, make it easier for women to return to the workforce after having kids, reducing our shopping restrictions, and prepare to boost our international education and trade effort.