Tucked away in an unassuming building on Abernethy Road, Kewdale are gun tech and assembly teams preparing cutting-edge remote control and automation software for mines around the globe.

This month RCT launched a new operating system – Multiple Machine Control – that allows a sole operator to control more than one mining machine at once. It also opened an office in Santiago, Chile. 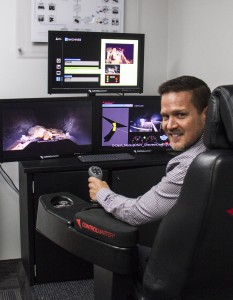 Santiago is the third international office to open in four years with US and Canada already established and Russia soon to follow, while a business development manager and RCT technicians are based in South Africa.

RCT’s Perth headquarters is the base for an eclectic mix of skillsets from software and hardware designers to manufacturers and assemblers who ensure RCT’s products will survive in the harshest of conditions, such as -45 degrees in remote Siberia.

Aiming for a 50/50 split of Australian and international revenue, RCT hopes to reach a 60/40 this year, with the international strategy borne out of the mining downturn, when 90 per cent of revenue was Australia-based and hit hard when revenue fell 20 per cent.

White says RCT had achieved moderate growth in recent years – 12 per cent last year and 15 per cent expected this year.

“We’re a niche business and a niche player. We’ve had many opportunities to buy revenue, to make acquisitions but we are very cautious about the areas we enter and not to sacrifice what we are doing now – how well respected we are – just for the sake of revenue growth,” White says.

Changing focus from a highly mechanical offering to a software-based business, the company has continuously expanded its product ranges to capture other industries outside of mining. Staff have increased from 130 to about 200 globally in seven years.

“It’s fair to say that 10-12 years ago we barely wrote a line of code. Now it’s less about the mechanical and hardware and more about the software and that has been a big challenge for the business but a good one,” White says.

Several small teams work on different areas, enabling it to move fast when an idea comes along.

A proof of concept team gathers and collates everyone’s thoughts, feedback from customers and strives for new inventions, iterations, platforms or products.

“Fail first and learn quick is our motto … Everyone wants to be in that team. That was the way we came up with to test things quickly and see if they work. We also developed trusted partnerships with mines who want to use RCT technology. That enables us to move fast.”

The company spends millions of dollars a year on developing products it knows its customers want. “It’s important to get the roadmaps right and we are of a size where we can turn on a dime,” he says.

“We keep top of mind where we are relevant, where it’s  going and where we need to position ourselves, otherwise you can end up in the realms of the blackberries and the like where you haven’t been keeping up and you’ve cash cowed your product and the technology has moved a full step ahead of you and you’re redundant.”

White says there are more exciting times ahead for RCT with surface fleets set to benefit from fully autonomous technology later in the year, based on its ControlMaster product.

The technology has been on individual vehicles above ground and has been fully proven in underground mining.

“We have predominantly been an underground technology provider and it’s been what we are known for, but It was a logical step for us to move to the surface and we’ve been pulled that way by our customers and the market, for autonomous solutions.”

“We’re excited to have an overseas customer who is keen to progress what we have done as a semi- autonomous to an autonomous offer, but we control the autonomous fleet, which will be integrated into a third-party control despatch system.

“It’s a really exciting product and can be controlled from anywhere in the world.”

It will add to RCT’s suite of products and services including Muirhead, Earthtrack, Ausprotec and Smartrack.

► CCIWA’s International Trade and Investment Centre has a team of advisors ready to help with all your trade and investment needs. Discounted services for CCI Members but available for everyone. Call (08) 9365 7620 or email trade@cciwa.com.