West Australians are planning long-delayed holidays in 2022, with one in two people set to travel internationally in the coming months as consumers spend an overall $5.6 billion on short-term holidays.

CCIWA’s latest quarterly Consumer Confidence Survey, released today, has found about one in three (33 per cent) respondents expect to holiday for up to a month, or to visit family (27 per cent). One in 10 plan a longer holiday of up to six months, while another five per cent will undertake short-term travel for work. 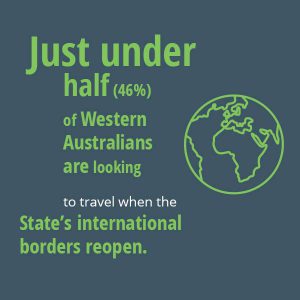 However, the number of West Australians leaving for an extended period, such as a permanent relocation or working holiday, does not appear higher than pre-COVID, the survey found.

The survey found household confidence held firm ahead of Christmas and the anticipated easing of border restrictions.

The longer-term outlook has softened, however, with two in five Western Australians (45 per cent) expecting the economy to improve in the year ahead, down 15 points since March. Overall confidence remains above pre-pandemic levels.

The biggest drag on confidence is rising living costs, concerning to nearly three in five WA households (56 per cent). This overtook fears of a COVID outbreak (52 per cent) which fell to its lowest point since the pandemic began (the survey was taken before the Omicron variant emerged). Unease about interest rates also rose 7 points, dampening the outlook of nearly one in three respondents. 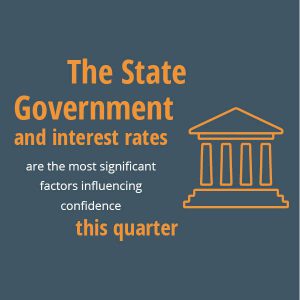 “With domestic economic factors returning to the stage after two years dominated by COVID, CCIWA urges all governments to bring fresh focus to improving conditions for the competitiveness of Australian businesses and the diversification of our economy,” said Morey.

“In this regard recent moves by the State Government, including the formation of its jobs taskforce and its Reconnect WA package, are welcome.”

CCIWA’s COVID-19 site has up-to-date information about the pandemic’s impacts on WA business.